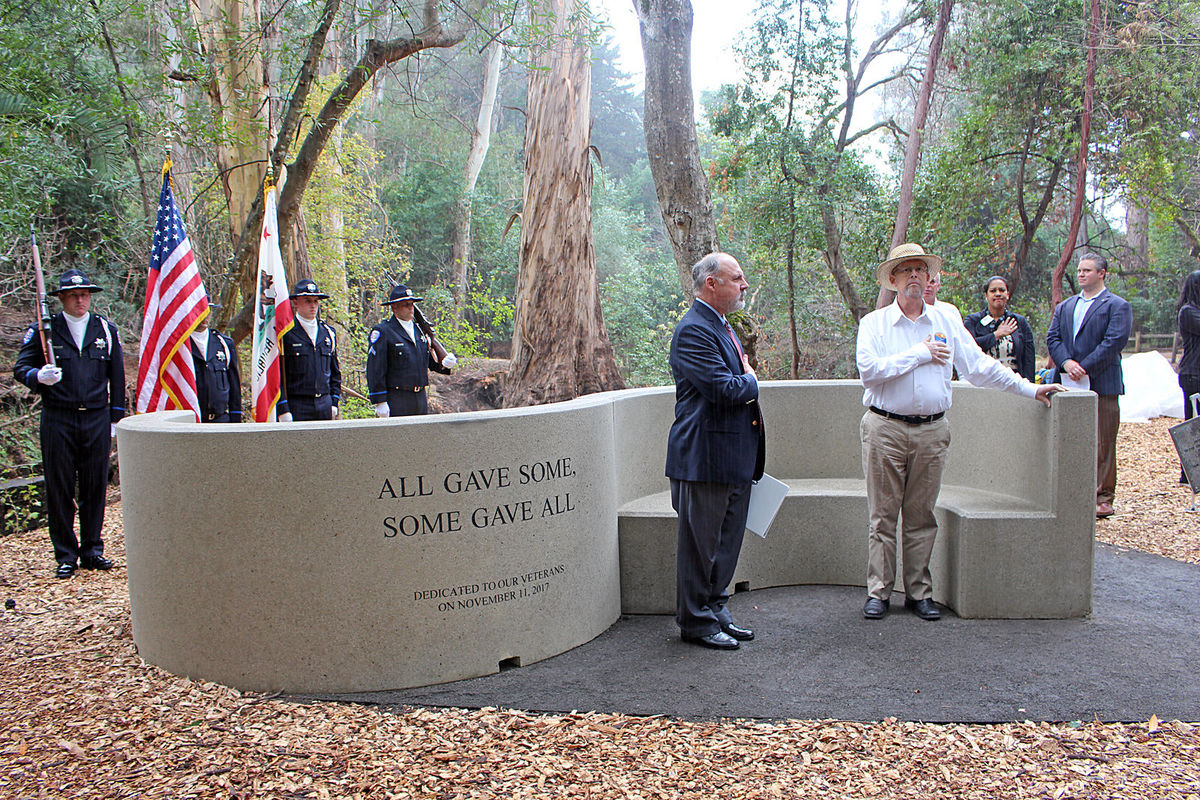 The veterans memorial in Twin Pines Park in Belmont city was inspired by Eric Reed, councilman, when he was attending a memorial at Golden Gate National Cemetery in San Francisco.

“A woman came up to him at the memorial and said she was the mother of Lars Sundell, a Belmont man who died in the Vietnam War. ‘Eric was so touched by that conversation that he made it his mission to create that monument,’ Stone said. ‘Lots of people deserved credit, but Eric was the champion of it.'”

Belmont council members and supporters gathered beneath the trees lining a path at Twin Pines Park as Veterans Day approached. They endured rainy conditions as officials removed a plastic tarp covering an S-shaped bench, a new memorial offering visitors a quiet place to remember military veterans and their service to the country. With an inscription of the quote “All Gave Some, Some Gave All” on one side and service medallions representing five military branches on the other, the earth-tone bench came as a result of Councilman Eric Reed’s efforts to honor those who have served as well as their families.

Belmont resident Randall Ramian, a retired U.S. Navy captain, thanked city officials and residents for recognizing veterans and their families with the new memorial. Ramian, who retired in August after 29 years of military service, said he followed in the footsteps of his father and grandfather who served in the Korean War and World War I, respectively. Ramian called the memorial a fitting tribute to those who have made sacrifices — some with their lives — to protect the freedom of U.S. citizens as well as the freedom of other countries around the world.

“It is important to preserve their memory with today’s and tomorrow’s generation,” he said.

Foster City resident Beth Gliniak said she didn’t know about the ceremony to unveil the memorial when she decided to take her 3-year-old son Jamie to the park Friday morning. But she was grateful for the opportunity to show her son the how much it meant to her family that her grandfather served in World War II as a member of the U.S. Air Force.

Belmont resident Louis Vazquez said seeing mothers like Gliniak bringing their children to the memorial meant a lot. He said he retired from the military 20 years ago after having served in the Marine Corps for 10 years as well as with the special operations forces. Though he’s seen memorials in other California cities, Vazquez said he was eager to see one unveiled where he lives.

City Clerk Terri Cook, who served on the committee that designed the memorial with Reed, said the group met several times at the creek side location in the months leading up to Friday’s ceremony to scope the project. As a part of the park that gets a lot of foot traffic, she said the outpouring of support from those who asked what the group was working on was encouraging.

“It’s been one of the best projects I’ve had the privilege of working on,” Cook said.

Reed acknowledged the committee members for their team effort in bringing the project to life, as well as his fellow councilmembers and the Belmont community for prioritizing the memorial.

“I think for generations to come it will be Belmont’s response to veterans who have fought in a foreign war or died and gave everything they had,” he said.”